The Expanded Services of the Rotating Equipment Services Center

We introduce the Rotating Equipment Services Center (RESC). The former rotating overhaul workshop has been further developed over the past period. In addition to the overhaul of equipment, RESC now also offers a flexible layer of technicians. This makes it possible to hire technicians to temporarily support own maintenance services.

Taking a Critical Look at Our Own Service Provision

Norbert Dubois, Rotating Equipment Services Center (RESC) Manager explains, "In order to improve our services, we took a critical look at improving our work process. At the same time, we wanted to hold a mirror to ourselves by asking customers for their views on our shop." Team lead Roland Connotte set to work on this: "By looking at the work process from beginning to end, we were able to identify improvements. This has resulted in a new working method for overhauls, including an inspection report, since January 2021. As well as this, I began talking to customers to find out their needs. It turned out that during busy periods they were particularly in need of helping hands. So, in addition to overhauling equipment, we now also lend out mechanics to customers, providing them with a flexible layer to fall back on."

Taking Each Other to the Next Level

In order to gain specific plant experience, the RESC mechanics shadowed their colleagues in the plants. "By taking on overhaul jobs together, they were able to share their e experience," says Norbert. "Plant mechanics have special knowledge of the process, to which our mechanics add specific overhaul knowledge. By combining this knowledge, we can better explain why a component has failed — a powerful collaboration."

Tom Caelen, Service Leader ACN“The added value is in the cooperation between the customer's mechanics and the RESC. Achieving something beautiful together.” 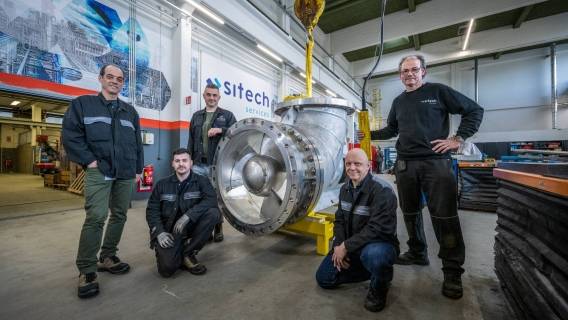 In addition, the RESC can call upon the expertise of engineers from the Technology & Innovation business unit, whenever necessary. There is even a Mechanical Engineer available at all times to ensure that technical problems can be addressed more quickly. Skill Pool Manager Jos Offermans explains, "We have the engineering skills to relieve Asset Engineers at customers. For example, by monitoring an overhaul with technicians and by collecting images of the damage. At the same time, technologists are able to retrieve process data. Then together we try to find out why a component broke down in a root cause analysis (RCA). Based on this, we can then give Asset Engineers specific advice for preventing the problem in future."

Several customers already regularly use support from the RESC to their satisfaction. Ivo Hutschemakers, OMM Asset Engineer: "During the gatekeeping meeting, we discuss malfunctions in the plant and see who is responsible for what. If we outsource work, we try to hand it over to the RESC wherever possible." Tom Caelen, ACN Service Leader: "Various RESC mechanics have worked here as second hires and are now familiar enough with the plant to be used when I'm short of staff, both to assist in the event of breakdowns and also to carry out preventive work."

The RESC's new way of working is gaining in trust among customers. For example, at IAZI, where a refrigeration pump needed overhauling. "We found out that something had gone wrong with the lubrication of a bearing," says Roland. "The adjustment data was incorrect due to a design error. We discovered this after intensive contact with the Technical Support Engineer and the manufacturer. This inspired so much confidence that we were also commissioned to overhaul the other IAZI pumps. It just shows that good work results in more work. And the combination of quality, on-time delivery and the absence of transport costs means that it also remains interesting from a price point of view."

Looking to the Future

The RESC is committed to further development. For example, mechanics receiving training to upgrade their knowledge and expand their skills. As Roland explains, "Last year we also deployed our mechanics at Turn Arounds. This was a resounding success, as shown by the fact that we have explicit requests to support Turn Arounds again next year." Norbert concludes, "In the meantime, we've already changed our image by recruiting the right people and we will continue to do so in the future."

From lighting to data is just a small step

Success with prescriptive and autonomous maintenance